In April 2018, Dr. Mary T. Wall went to Gorkha District Hospital, Nepal, as an AWB volunteer with the District Hospital Program (DHP), a collaboration between Patan Academy of Health Sciences (PAHS) and AWB. It is supported by the Society of Rural Physicians of Canada and was designed by Dr. Karl Stobbe, a member of the PAHS International Advisory Board, together with his colleagues at PAHS. The aim of the collaboration is to have physicians support the students on rotation in their clinical work and mentor the graduates on effective communication skills. At present, the physicians are expected to contribute their efforts primarily in the rural hospitals and their outpatient clinics.

This is Mary’s story: 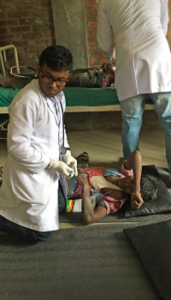 Sunil is a 21-year-old in his fifth year of medical school at Patan Academy of Health Sciences in Nepal. He entered medical school at 17 years of age, having completed his education to that point all on scholarships. He is from Dhanusha District and is of the Dhanuk (Mandal) caste. He is the only son in his family and has three sisters.

From a very young age Sunil did not worry about the boundaries of the caste system – he played with all the children even though it was frowned upon. Once he completed grade 10, his father wanted him to work as a labourer, but he refused and said he wanted to continue higher education. With a scholarship he was able to complete grades 11 and 12, but had to travel three hours each way to and from school on a bicycle, as his family could not afford housing for him close to the school. During part of the period when he went to study and write exams for entrance into medical school, he was homeless. With the help of two close friends he scrounged accommodation and minimal food to allow him to complete the required courses and write exams. It was his devotion to scholastic achievement and his earnest desire that propelled him into medical school at age 17.

I think it is this determination, and knowing he had to be his best all the time and every time, that he has acquired an amazing knowledge base in his studies, and his work ethic is second to none.

Sunil was in Gorkha three weeks before my arrival and already he knew the whole hospital – all the staff, all the departments – and spent extra hours each day in Emergency, the delivery room, and the O.R. because he wanted to see and learn, knowing that in two years he wanted to be the most competent doctor he could be wherever he might be placed. We had a lot of discussion of how he wanted to increase the living, health, and education standards of the people he would live and work with.

Each time Sunil has returned to his home in the past five years, he has spent time going to his old schools and talking with the students and, on his most recent trip, he spent time educating to his community about health issues. He checked the blood pressure of over half the people in the community and gave them information about heart health. Very impressive for a 21-year-old.

Sunil is always very aware and appreciative of his mentors and instructors. He is always thinking and always asks questions. When I was leaving, he was assisting the emergency medical officer to rewrite policy and procedures for Emergency. He volunteered for this as he knows it will prepare him for the future.

“I need to have as much experience as possible, so when I am an general practitioner physician I will be capable one, and a compassionate competent leader, “ says Sunil. 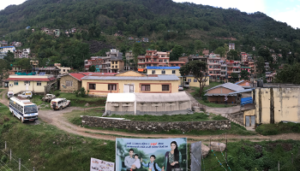 Born and raised In Rural Newfoundland, Dr. Mary Wall’s early education was in a one to two room school and her high school years started in a newly built school which congregated all the children from 16 communities in grades 7-11. She graduated with a district scholarship for university.

After a 2-year RN diploma program she worked in a small rural cottage hospital in Newfoundland and then returned to Memorial University to complete a Bachelor of Nursing with one term in England for Occupational Health. Mary worked for 10 years in all fields of Nursing: medical-surgical, pediatrics, ICU, CCU, Home Care Nursing and a lot of ambulance travel; plus instruction in basic nursing skills in Portage la Prairie, Manitoba.

Mary then went on to receive an MD from Memorial University and started practicing full service rural medicine. She moved to British Columbia where she worked full time in full service Rural Family Medicine for 16 years, running 2 practices 20 kilometres apart with full admitting privileges at a rural hospital 45 minutes from her home. She was involved with OR assisting, teaching Neonatal Resuscitation and CPR and acting as the point person for CME at the hospital, plus obstetrics, ambulance call with her jump kit in her trunk, general practice in oncology with chemo two days a week and palliative end-of-life home care.

Mary moved to Kelowna, BC, where the majority of her work was as a General Practitioner in Oncology in a hospital setting. She continued with obstetrics in Penticton Hospital until June 2013; she worked three rural locums in Nunavut and also in Boundary Area of BC. Mary is an associate professor at the University British Columbia with a family practice residence in Options for Sexual Health Clinics.

Your ticket for the: Mary Wall